Tanete is one of the famous kingdoms on Selayar Island that once proved the glory of its time. King Tanete, known as Bulaenna parangia, during his reign was highly respected and loved by his people. This form of reverence and love has been recorded in the history of this kingdom. An epic entitled "Bulaenna Parangia" a kind of sinrilik, painting a harmonious relationship between the people and the ruler (king).it is mentioned that in every indigenous unity in the Tanete Kingdom, the king is honored by means of a title with the title depicted as valuable objects or jewelry. In Parangia customary unity, its king was given the title of Bulaenna Parangia (Gold from Parangia), the people of Tonjo customary called its king with Intanna Tonjo (Intan of Tonjo), and many other honorary titles. It is interesting to examine the historical sociology, its relation to the pattern of relations between the people and the rulers of the past with the pattern of power relations in the present.

Most read articles by the same author(s)

Obs.: This plugin requires at least one statistics/report plugin to be enabled. If your statistics plugins provide more than one metric then please also select a main metric on the admin's site settings page and/or on the journal manager's settings pages.
Information

Published by RAYHAN INTERMEDIA (Research Agent for Humanity and Urban). 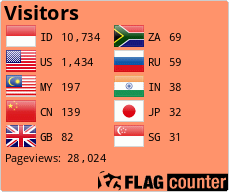